It’s no secret that great books get turned into movies and these days it’s all about YA. But what about books being made into video games? If you think about video games that are based off books (Harry Potter, LOTR) they all came out after the movies.

Out of all the games I’ve played there’s only been two that feature a book character. Demon Stone an RPG that released in 2004 and the  Baldurs Gate II Collection for PC. Both games are based off the Forgotten Realms campaign in Dungeons and Dragons. In each game, Drizzt Do’Urden–best fantasy character EVER–makes an appearance. In Demon Stone, he’s playable during part of the quest. I can’t tell you how awesome it is. I have it saved right before that part. In Baldur’s Gate II, his entire party shows up while questing. You can try to attack them, but they are impossible to beat–at least for me. 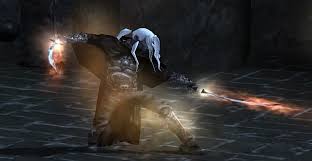 Baldur’s Gate: Dark Alliance for the console also had Drizzt as an unlockable character. I still haven’t beaten this game and now my PS2 is on its way out : (

But other than dear old Drizzt, I’ve never come across a game that featured literary characters (not talking about the movie based ones).

Why do you think that is?

I have a theory.

Because the gaming industry is still pre-dominantly male based and the YA fiction world is woman based. Let’s face the truth, video games are rarely made for the girl audience unless it’s a younger generation. Then you have games like Cooking Mama. It pisses me off. How awesome would it be to play a game like DIVERGENT? I bet even if they did TWILIGHT right, it could be good.

16 responses to “Books into Video Games”