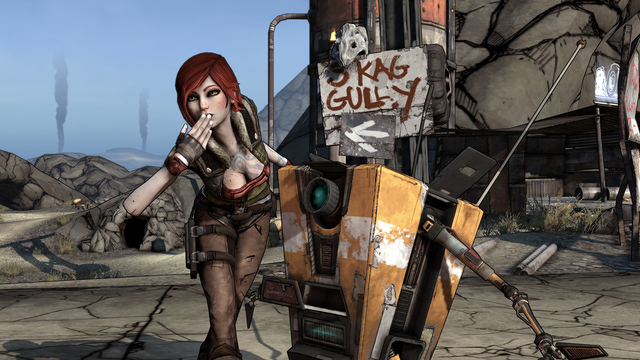 For those non-gamers or gamers who somehow never heard of Borderlands, Borderlands is a first person shooter set in a post apocalyptic type world–kind of like Fallout but cooler. There’s guns, guns
and more guns. Even though I love all the quests and massive amounts of shooting, it’s the co-op that makes this game what it is.

The hubby and I are both gamers. We love co-op games. In this one, it’s a splitscreen which means I can run around and pick up loot while he kills the bad guys. The co-op aspect runs smoothly. You can ride vehicles like in Halo and you can log in under your own screen name. This is cool because you get your own trophies.

If you haven’t played Borerlands yet, I highly recommend it. There are tons of quests. It’s not super hard and you can play with your friends. Plus, Borderlands 2 drops on September 18th and you are definitely going to want that.

And for those girl gamers, there is a girl character. She’s got a few cool abilities. One of them is an ignite. When you kill an enemy, fire wings sprout and you light up any enemies near you–but watch out, I’ve blow some things up this way too, including our vehicle.