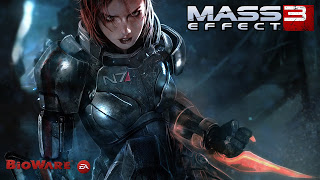 I have one word for this game: EPIC

At the end of Mass Effect 2, I survived and none of my squad mates perished. It’s interesting to think what would have happened if one of them did die. Would they somehow reappear in Mass Effect 3? But I was lucky and got to see everyone again.

Here’s a quick review of the game:

Romance: (because we all know that’s the most important factor ; )

If it wasn’t for Thane, the romance in ME3 would have SUCKED. If you romanced Thane in ME2 he makes an appearance in ME3. It’s AWESOME.

As a female you only get two options: Garrus or Kaidan. Garrus will only be romanceable if you romanced him in MA2–I didn’t. The romance with Kaidan is short and rushed. There’s only a few conversations and then you’re professing your feelings at the Citidal. The next CG scene you have with Kaidan is at the end. The good old sex scene. It was nicely portrayed but I didn’t feel connected to Kaidan. I would have rather stuck with Thane for the entire game, but since he’s not in your squad and terminally ill, you can’t.

The first person shooter works smoothly and the AI functioned as expected. Weapons are modable which I didn’t realize until halfway through. ME3 fighting is fluid and one of the reasons I love this game. I found the opponents in ME3 a lot harder. This one in particular: BANSHEE

The first time this creature showed up, I got a little spooked. They phase and teleport closer to you and if they get close enough to touch, you’re dead. Not to mention the creepy wail they do.I liked that Bioware added different creatures with different skill sets. Instead of blindly shooting, you had to think about your targets and utilize your powers. Take their armor down, destroy their shields ect.

Out of all the bad guys, I hate these the most.

They’re like fast zombies and they freak me out.

When I said before that this game is Epic, it is. The reapers have come to destroy everyone. Your job is to collect armies and unite the different races to fight against the reapers. The battles are epic in size, people and worlds are being wiped out and comrades you love are dying. The scope of the battles is mesmerizing, beautifully drawn and you really feel immersed in the war. At the end of the game you have to make a choice; a choice that will change everything. After beating the game, I sat, stared at the TV and went woooowwwwww.

Overall, this is an amazing game and an amazing way to end Shepard’s journey. Bioware has a way of getting you completely invested in their games and I can’t wait to see what they have planned next.