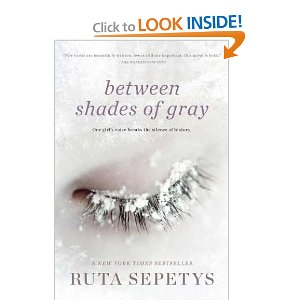 This is not the Twilight fanfic or some smn spin off. This book will take hold of your heart and not let go until the last page.

Lina is just like any other fifteen-year-old Lithuanian girl in 1941. She paints, she draws, she gets crushes on boys. Until one night when Soviet officers barge into her home, tearing her family from the comfortable life they’ve known. Separated from her father, forced onto a crowded and dirty train car, Lina, her mother, and her young brother slowly make their way north, crossing the Arctic Circle, to a work camp in the coldest reaches of Siberia. Here they are forced, under Stalin’s orders, to dig for beets and fight for their lives under the cruelest of conditions.

Lina finds solace in her art, meticulously–and at great risk–documenting events by drawing, hoping these messages will make their way to her father’s prison camp to let him know they are still alive. It is a long and harrowing journey, spanning years and covering 6,500 miles, but it is through incredible strength, love, and hope that Lina ultimately survives. Between Shades of Gray is a novel that will steal your breath and capture your heart

Wow. I’m breathless. Right from the start you’re pulled into a world you can’t begin to understand. This story mirrors real life occurences. People went through this. People died like this. I couldn’t put it down. One of the best books I’ve read this year and one that made me think twice about complaining. I’m blessed. Books like this remind me of what’s important.

So, I’ve read two amazing books this month ROOM and BETWEEN SHADES OF GRAY. If anyone has some similiar reads, please let me know!

4 responses to “Between Shades of Gray”