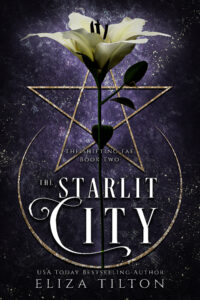 A human sorceress. A dark fae mage. A deadly war that will seal their fates forever.

Kelia is one of the Magi Council's top sorceress and they've sent her to the underground City of Stars to retrieve a prodigal child from the dark fae. The child is the key to the spell that will close the Rift in the Never for good.

To make it to the city, Kelia will need the aid of a dangerous mercenary named Callum whose last twenty years were spent in a magi prison. The Queen demanded his release in exchange for the child, and not even the magi understand why. He's shifty, untrustworthy, disgustingly handsome, and Kelia will need more than her arcane tricks to keep Callum focused on the journey ahead.

When they reach the underground city, and straight into war, their darkest fears become real. If they want to survive, they'll need to learn to trust in each other and combine their hearts and spells to stop the deadly siege.

If not, they’ll never see the surface again.

The Starlit City is a standalone Fantasy Romance within the Shifting Fae world perfect for readers looking for sweeping, epic fantasy, a slow-burn romance, fast-paced action, and a happily ever after.